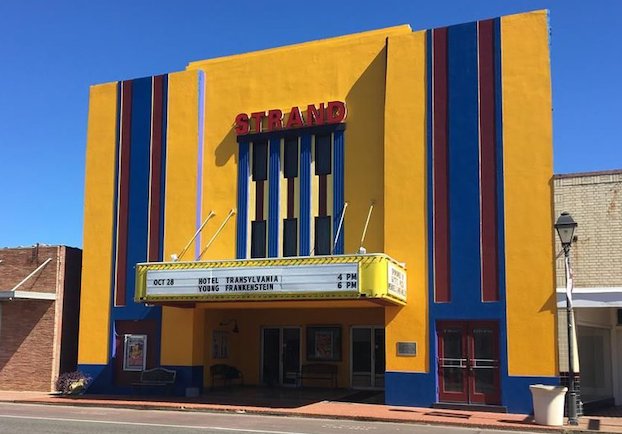 Murder, mayhem and mystery head to the stage at the Jennings Theater

Strand Theater in Jennings. (Special for the American press)

Theatergoers and movie buffs will get plenty of murder, mayhem and mystery at the Strand Theater as local acting groups kick off the fall season in October.

The season also includes holiday stage productions by children’s and youth theater groups and a series of family movie nights at the historic Strand Theatre.

“The whole month of October is filled with murder, mayhem and mystery and we end it with plays and movies, which makes it unique,” said the city’s project coordinator, Lin Fake, adding that the fun continues with the Christmas theme. “We wanted to have something for kids and adults so everyone could be entertained and everyone could show off their talents.”

A Block off Broadway Community Theater kicks off the season with its production of “Alfred Hitchcock Taught Me All I Know” by Pat Cook. Performances will be at 7 p.m. October 1 and 8 and 2 p.m. October 2 and 9 at the Strand Theatre, 432 N. Main St., Jennings. Tickets go on sale September 26.

The play revolves around Maura Milton, who applies for a job as an accountant at the home of a certain Tyrone Bartholomew. However, she soon discovers that there is not one Tyrone Bartholomew but several. This vivacious old actor savors life and flies from character to character whenever he has to do with the outside world.

The murder, mayhem and mystery continue at 6 p.m. on October 15 with a movie night at the Strand Theater featuring Alfred Hitchcock’s “Psycho.”

Kids and young-at-heart adults can enjoy Disney’s “The Nightmare Before Christmas” at 6 p.m. on October 22.

CHIP’S Littles Production will present their holiday performance “Can Mrs. Claus Save Christmas?” by Ruth Ann Pattee at 7 p.m. Dec. 17 and 2 p.m. Dec. 18. The play begins with two weeks until Christmas and an exhausted Santa Claus dreaming longingly of a vacation in Hawaii. But even with the elves working hard and Mrs. Claus checking the list of good girls and boys, he just doesn’t have time. Meanwhile, villainous Gil Bates, a multi-millionaire video game maker, yearns for the one thing he doesn’t have: the love of children. Bates knows that Santa Claus is loved by all children, so he decides to kidnap him and force him to reveal the secret of his magic.

CHIP’S High School production of “The Musical Comedy Murders of 1940” by John Bishop will premiere at 7 p.m. on March 31 and April 1 and at 2 p.m. on April 2. The play revolves around the creative team responsible for a recent Broadway flop in which three chorus girls were murdered by the mysterious “Stage Door Slasher.” The band reunite for a supporting audition for their new show at the Westchester estate of a wealthy angel whose house is filled with sliding panels, secret passageways and a German maid who is apparently four different people – who all figure diabolically into the comic mayhem that follows when the infamous “Slasher” reappears and strikes again and again.

The first ABOB production of the new year will take place in June. The production will be announced later.

Movie nights at the Strand Theater will be at 6 p.m. unless otherwise noted, and doors open at 5 p.m. Tickets are $3 with kids 12 and under free.

Films scheduled for the 2022 season include:

Theater Arts in the Archives

O Yeong-su Returns to the Theater Stage: The DONG-A ILBO