Playing under the stars of the spring night, this show was magical. NextStop Theatre’s Dream of a summer night, directed by Christopher Michael Richardson, was a fast-paced crowd pleaser, full of laughter, mirth and joy.

This particular NextStop production was the inaugural presentation of Theater in the Park by the Reston Community Center and the Reston Town Center Association.

The play featured four couples, in various states of love and discord: Hermia and Lysander; Helen and Demetrius; Oberon and Titania; and the Duke of Athens and Hippolytus, Queen of the Amazons.

As Theseus, Duke of Athens, was preparing to marry Hippolytus, an old man, Egeus, came to court and complained that his daughter Hermia had fallen in love with Lysander. The Duke then ordered Hermia to obey her father and marry another man, Demetrius, on pain of death. Hermia and Lysander have escaped into the countryside woods, with Hermia’s friend Helena and Demetrius in pursuit. As usual, Shakespeare added a few other mirrored subplots – and mistaken identities – on top of all that.

Shakespeare would have based Dream of a summer night on The Menaechmus Twins by the Roman playwright Plautus. It is the story of two twin brothers, Menaechmus and Sosicles, who are separated at the age of seven and spend years before being reunited. He also wrote the tragedy Romeo and Juliet around the same time as Dream.

But because Dream of a summer night is a comedy, lovers fare better against obstacles to their love. Unlike the doomed Romeo and Juliet, these characters, with a little help from magic, somehow bring chaos together.

There are plenty of serious themes in this comedy: fathers seeking control over their daughters (Shakespeare had two daughters); men controlling women; city ​​values ​​versus country values, and same-sex friendships versus heterosexual love.

This show must have a good Bottom, Nick Bottom. Representing the so-called bottom of society, Bottom was an actor in a play, Pyramus and Thisbe, who figuratively and later literally (due to magic) became a donkey. More shades of Romeo and Juliet here: Pyramus and Thisbe were two lovers from the city of Babylon who lived in adjoining houses.

Michael Burgos’ performance as Bottom was explosively good. This actor, also a prolific author of children’s games, played the character’s notes to perfection. His physical comedy and comedic timing electrified the crowd.

Dr. Devin Nikki Thomas, a new assistant professor at Bowie State University, was brash and overbearing in her royal roles as Theseus and Oberon. Director Richardson made an interesting choice to play Shakespeare’s homosexual themes: he had the excellent and charming Nicole Ruthmarie play Hippolyta and Titania, the latter being the fairy queen of the fairy king Oberon, so the two royal couples were woman / woman.

Close to Burgos in terms of vigor and stage presence was Isabella Lash as Helena. Lash, in his NextStop debut, had plenty of electric scenes with Kime and Oelkers.

NextStop veteran Carolyn Kashner’s puck was fun to watch. She even got to perform a rap song. Charli Simone’s Peter Quince, an unfortunate director in the play, played his character neither too wacky nor too understated.

I was confused about the costume design scheme of the show. Many of the male characters were dressed as if at an affluent beach party – Hawaiian shirts and khakis for example. But the fairies and royal figures were dressed in resplendent purple outfits, including Thomas’ arch-shouldered dress. Burgos had to wear a translucent, purple donkey’s head. Costume designer Alexa Duimstra did a great job there. Richardson made another interesting choice to have Oberon/Titania (Thomas/Ruthmarie) change costumes on stage to Theseus/Hippolyte.

The sound design included plenty of background and ambient music to keep the energy flowing throughout the show. Justin Schmitz has done the show a great service with this design.

Sarah Beth Hall’s stage design consisted of a white tent and a concrete park structure dressed in green leaves reminiscent of a forest. Hall managed to dress up a park in the middle of a shopping area.

This show will leave you with a feeling of magic and wonder. Bottom’s titular dream was so called because it had no bottom. There is no bottom to the enjoyment you will have at this show.

Dream of a summer night plays Saturday, April 30 and Sunday, May 1, 2022 at 7 p.m. presented by Theater in the Park produced by NextStop Theater performing in the Reston Town Square Park Amphitheater, 11900 Market Street, Reston, VA. The performance is a free event for all. Bring a chair and refreshments.

COVID safety: “An inherent risk of exposure to COVID-19 exists in any public place where people are present.” The show is outside. (NextStop’s COVID Customer Homeland Security Policies are here.) 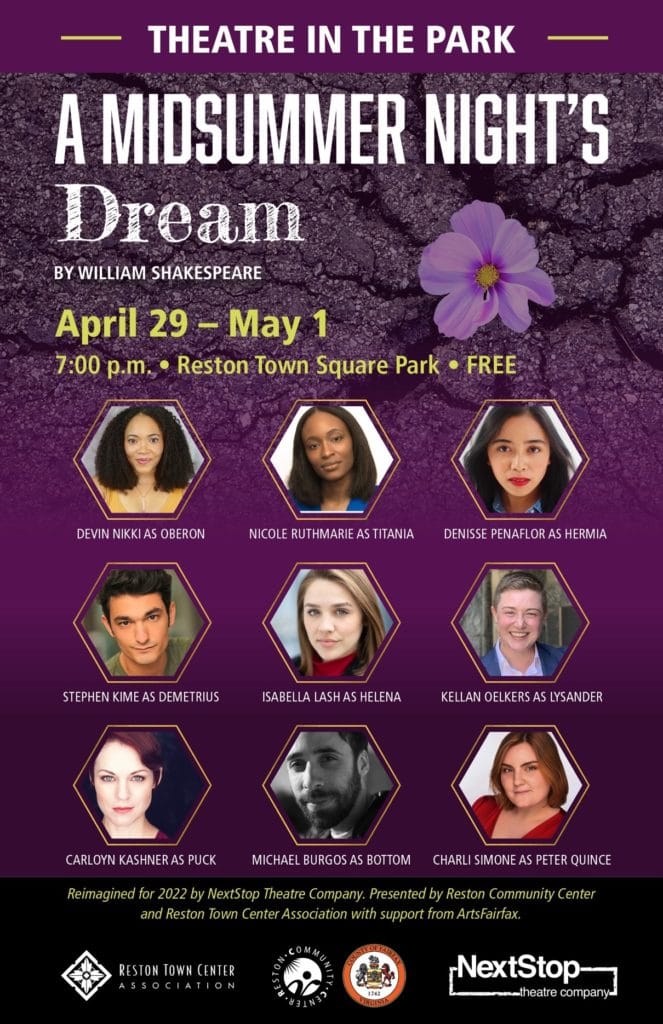