If you use the theater as an escape, attend a play called A delicious quarantine right now might seem crazy. Too close to home? Clever or silly marketing ploy? What were players in the Reston community thinking? !

Turns out, this production was in the works long before an unseen threat rocked and locked down our world. COVID sidelined the project, along with much of our humanity. But now, with so much humanity in store in this colorful sci-fi adventure, RCP doesn’t seem to have picked its moment; on the contrary, he chose them. Oooo-weeee-oooo.

At first glance, Mark Dunn A delicious quarantine (2007) has nothing to do with the quarantines we know and hate. But seeing a fully masked audience unfazed to meet players dressed in familiar hazmat suits or learning that an existential threat is rapidly spreading through pockets of the planet and the government has issued a mandatory stay-at-home order…seems so real that it is surreal.

As advertised, what’s set in peaceful Susqua Creek Acres, an enclave of Willspier, Pennsylvania, is a pure delight. In the midst of an alien invasion – the kind of outer space – 17 eccentric characters are gathered together as prisoners in seven households, but randomly arranged by cell. Some are trapped in other people’s homes. Some are trapped in bad marriages. One is a criminal suddenly under house arrest. They depict couples at every stage of life: two young girls playing dress-up in an attic; two old biddies with youth in all their fibers (and their loins); two singles on a first date; two groups of mismatched middle-aged kindred spirits; two sets of siblings, including twins separated at birth, face life-and-death dilemmas. As aliens roam freely outside collecting soil samples, humans are forced to explore the dirty, inner terrain of their relationships.

It feels a bit anthropological as the Professor lectures the audience about human failings – a disappointing narrative device. Still, the action on stage is really funny. Not wacky or fun to the minute, but deeply funny. Director Liz Mykietyn manages to make each wacky script work, layering truth with slapstick, weaving disjointed elements of the script into a unified tapestry of discovery and hope. The dialogue never seems forced, the emotions ring true.

A vibrant, tiered set design by Anna Mintz (set designer/scenic artist) and Alexa Yarboro Pettengill (set designer and props) drips with imagination, further defining the spectrum of the afterlife and inner sanctuaries. Door frames in a rainbow of colors and styles are raised and lowered from the rafters to divide each space. Amazingly, seven households are made, compressed like miniature village collectibles, using a riot of colors and textures, items salvaged from flea markets. Combined with coordinated costume design palettes (Kathy Dunlap) – red for one cheating couple, purple and white for another, buttery yellow for siblings feasting on popcorn in front of the TV. Everything explodes like a scene from Willy Wonka. Cartoonish but comfortable.

The most extravagant look, like something out of Oz, is reserved for Alexa Yarboro Pettengill, who plays a mother coming to terms with life’s toughest choice. She’s one of the more complex characters, and Yarboro Pettengill successfully injects an easy hippy vibe that sidesteps self-doubt and judgment – despite the drama of a quickly judging family.

One of the first actors to earn our full buy-in is Kevin Dykstra. He plays model husband Roy who’s hiding a bombshell secret – though the revelation probably won’t wink at today’s savvy audience. Still, Dykstra is a sniper in his craft, producing shock and chemistry with his capable foil, Charlene Sloan, as neighbor Shirley.

Allie Blanchet and Jane Keifer, BFFs Diandra and Jennifer, respectively, also stood out from a top-notch cast on opening night. (Birdie Thomas and Cara Ethington rotate in the roles during other performances.) These youngsters were poised and precocious in their comedic timing — real pros in the making.

But the comedic brilliance of veterans Kim Thornley and Liz Weber as close pals Violet and Mavis cannot be overshadowed or overstated. They turn into vigilantes after capturing a burglar (the lowly but resourceful Anthony Pohl). Even through hilarious geriatric gymnastics, they expose the grim contradiction that people can turn violent in a misguided attempt to curb violence.

Shelby Kaplan also gets her hooks by humanizing and deflecting stereotypes of a “crazy cat lady.” (Is she really one, though, or is she just crazy?) Kaplan plays on the cheapest seats — expansive tones and gestures — then artfully tones down with nuances like goofy, loving Judeen. Judeen is thrown into purgatory with Chester (Michael Wong), whom she has just met for a date and who initially makes her regret not having swiped left. Together, Kaplan and Wong rise above the mediocrity of the script, blending tenderness and fantasy. Wong is also a masterful comedian, whose character goes from practice — first using his lockdown for honey chores (we’ve all been there) — to possessed, his eyes open to the intangibles of love.

A theme that may resonate with viewers, whether midlife soldiers or Holocaust deniers, is not “seeing is believing” but “not seeing is believing.” For example, one question gnaws at Judeen’s 14 cats, whether any of us can believe their eyes or truly see into another’s heart. The tug of war between faith and skepticism resonates in the power couple of Sue Stadler (Eileen Marshall), who faces a serious health crisis, and her brother, Dean Stadler (Danny Seal), an atheist called to suspend her own disbelief and pray for her. When Stadler finally delivers, it’s a universal moment of deliverance.

Another euphoric moment comes with the intermission, in which the plague on all the houses ends. Hustle-crazed locals go wild, as if dancing for their lives, to a recording of “Jumping at the Woodside” by the Count Basie Orchestra. Their thumbnails erupted like viral TikTok videos launched into the universe by so many COVID captives, looking for a lifeline.

As we approach Year 3 of The Dangerous Life, shake off the recurring nightmares by enjoying a slumber party outside of your own pandemic pod. In these seven “fun houses,” at the intersection of art and serendipity, the hallways have mirrors — but you’ll come away thinking life doesn’t look so bad. 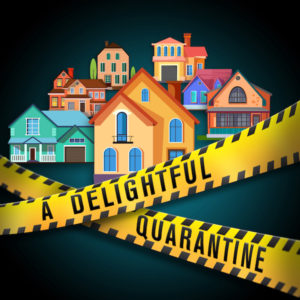 A delicious quarantine is played through March 12, 2022 at CenterStage at the Reston Community Center, 2310 Colts Neck Road in Reston, VA. Curtain time is at 8 p.m., except for the morning of March 6, with a curtain at 2 p.m. For tickets ($25 to $30), contact the box office at (703) 476-4500 x3 or purchase on line. CenterStage is accessible and offers listening devices for the hearing impaired.

The program for A delicious quarantine is online here.

COVID safety: Masks covering the mouth and nose must be worn by all people inside the Reston Community Center, regardless of vaccination status, according to the Fairfax County government. RCP’s full COVID-19 policies and protocols are here.

Studio Theater is giving its building upgrade a “Hi, nod!”

The Perisphere Theater opens a powerful and poetic “blue door”